It is also called irb. It allows us to type ruby expressions or statements. Open the command prompt and type irb. (both Windows and Macintosh). As you can see in the above screen, we can write ruby expressions and statements. The texts entered within quotes are called String. We can perform Concatenation Operation (concatenation - Joining two Strings) on two strings.

We can store the value to the variable simply like,

Ruby is a case sensitive programming language. So, name is different from Name and NAME.


We can also perform some complicated operations. See the below code snippet which prints numbers from 1 to 9. 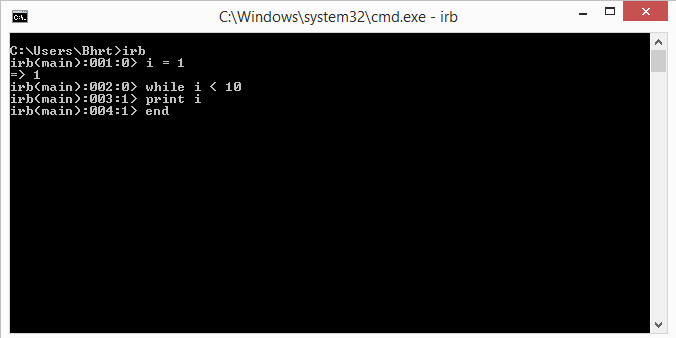 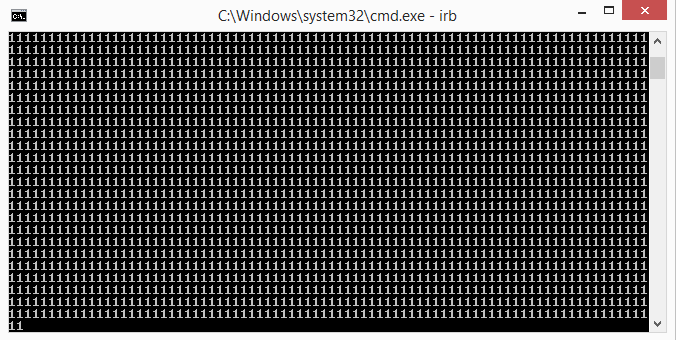 Whoa!! What just happened? You might be confused after seeing the output. We said it prints 1 to 9. But it's showing all 1's and that also too many. This is because the variable i was not incremented. Press Ctrl + C to terminate the execution.

The following code prints from 1 to 9

We can also define functions in irb. A function is a set of statement(s) to perform a particular task. Here is a function that returns square of a number.

Calling this function and passing 4 as argument returns 16 by performing the operation 4 * 4. Likewise, a function to find the area of a circle.

We are going to run ruby from a text editor rather that a Command Prompt. You can use any text editor like Notepad, Notepad++, Sublime, Brackets. Ruby scripts have .rb extension. So, you have to save the file with the extension .rb. Now, in your editor enter the following code and save it with any name with .rb extension:

Let's save this as first.rb. To run the program, go to Command Prompt, and type ruby first.rb. You can also run by simply typing first.rb as well, if during installation, "Add Ruby executables to your PATH" option was checked.

Likewise, you can use any text editor in Macintosh and follow the same procedures as in Windows.