Strings can be formed in ruby using single quotes or double quotes.

Any characters such as number or alphabets or symbols enclosed within quotes are Strings. 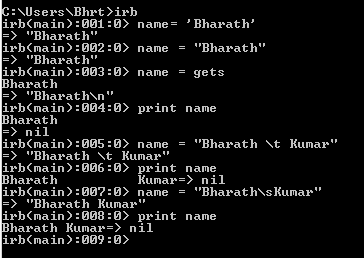 We've already learnt about adding newline character to a string. Likewise, other characters can also be embedded in strings.

Use \' inside double quotation to include apostrophe in string.

In the below image, when using a single quote inside the string's single quotes, you can see that we aren't able quit the interactive mode. So, it's not advisable. 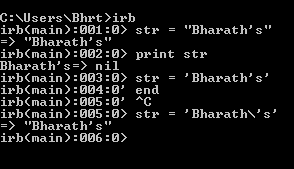 To create a multiline string and store it in a variable HERE keyword is used.

So, the value What you do\ntoday can\nimprove\nall your\ntomorrows is stored in the variable quote. This is the easiest way to store large fragments of text in the variable.

Split is a useful method for taking the string and splitting into parts. Its syntax is :

Where, the delimiter is the point from where the string specified will be split into two.

Squeeze is used to remove trailing spaces from the string. Following is the syntax for it :

In the above image, you could note the number of spaces in the variable first. When printing the first variable using squeeze method it removes the trailing spaces.