Variables and Datatypes in Ruby

In this section, we are going to work with numbers data type. Ruby supports major number systems such as whole numbers, floating point numbers. Different bases such as Binary, Octal and Hexadecimal are allowed.

To write in binary we use 0b and the corresponding number. For example, 5 can be written as 101 in binary. Likewise, to represent number in hexadecimal 0x is used and for octal 0 alone is used. Negative numbers are represented by using unary operator - (minus) before the number. 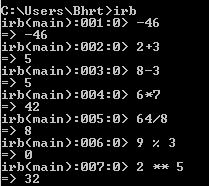 In above image, you can see the arithmetic operations performed.

We will learn about operators in detail in a subsequent lesson.

abs is a method used to find the absolute value of a number. For example, -26.abs gives the value of 26. Some other methods are div and modulo.

You can also convert numbers to strings. For example, to convert 100 into a string :

Boolean type variables can hold two values true or false. But in ruby, it can also hold third type of value in Boolean variable called nil. But in most context, we work with only true and false values. So, let's concentrate on those two.

Boolean data type is used in comparison, loops and decision making statements. 100 > 1 returns true. Because 100 is greater than one. Likewise,1 > 100 returns false.

You can also assign Boolean values to the variables.

After this assignment, the variable flag contains the Boolean value true. 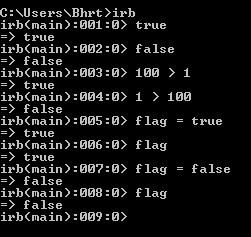 You can also double negate the variable. But negating more than once tends to be confusing. Hence it's best to stick with single negate when you need it.

Constants are variables that holds the same value throughout the program. Ruby is a typical language, where you can reassign constants. As per conventions, all constants in ruby in uppercase characters so that they are easily distinguishable.

Notice that it did change the value of the constant, but it gave a warning saying that "PI is already initialized constant".

So, just be aware that you can define constants in ruby, you can also change its value which means you wonder they shouldn't be called constants. As we already said, Ruby is a typical language.