In this tutorial, we will cover the basic introduction of the Matplotlib library in Python, important modules within Matplotlib, how to install Matplotlib module and we will understand how this library is useful for data visualization.

Matplotlib is basically a Multiplatform visualization library for data that is built on NumPy Arrays. This Library is designed to work with the broader SciPy stack, which includes different modules of Python used for machine learning and data science.

It was written by John D. Hunter in 2003 and it was born with its 0.1 version. Matplotlib received an early boost at the time when it was adopted as the plotting package of choice by the Space Telescope Science Institute.

There are two important modules in Matplotlib Library and these are given below: 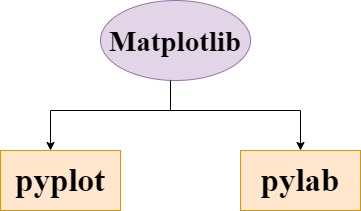 The dependent packages of Matplotlib and the matplotlib itself are available in the standard Python package repositories in the form of a wheel package. Thus it can be easily installed on MacOS, Window, Linux, etc. using the pip package manager.

Note: You must have Python installed on your machine, to install matplotlib module. Here is our Python Installation Guide.

You just need to open your command prompt write the following given command:

If you are using Jupyter Notebook, then it is important to note that Jupyter Notebook comes with many preinstalled libraries like Numpy, Pandas, Matplotlib, Scikit-Learn, so you don't have to worry about installing these modules/libraries separately.