Working with Text in Matplotlib

In this tutorial, we will cover working with the text in Matplotlib.

There is extensive text support in Matplotlib that includes support for mathematical expressions, the Truetype support for raster, and vector outputs, also there is a newline-separated text with arbitrary rotations, and Unicode support.

The Matplotlib library has its own matplotlib.font_manager that is used to implement a cross-platform, W3C compliant font finding algorithm.

Given below is a list of commands that are used to create text in the Pyplot interface as well as in Object-oriented interface:

All these functions create and return a Text instance, which can be configured with a variety of font and other related properties.

Now its time to cover an example in which we will add different text info in different styles to our figure:

Following is the output for the above code: 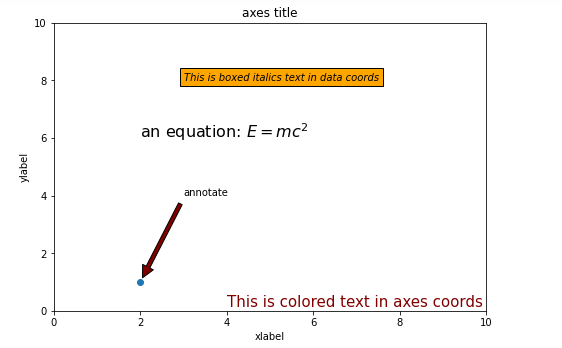