Modern digital games can be considered as large software projects which run and are made up of thousands of lines of code to millions of lines of code. Object-Oriented Design (OOD) came into existence to deal with large software projects. The GDD or TDD are made keeping in mind all the demands of OOPs along with the implementation details (TDD for technical details and GDD for entire Game Details) within it.

The Technical Design Document provides a blueprint for the software engineers in your team to implement and code the features of your game. The technical design document will let your developers to specify - what are the requirements, how they should be implemented, along with the tools and technologies required for the implementation. The connection between structural design of a Software and Technical Design Document is that the technical design document has a broader scope with less details, than a software architecture diagram.

Here we have a very good TDD example (designed by some students for their college project): TDD Example

When anyone says that, "check in the design document", they basically refer to the Game Design Document (GDD). This document gives a detailed explanation of all of the game characters, the stages or levels, the game mechanics, the views and scenarios, the storyline, various menus and options implemented etc for the game. 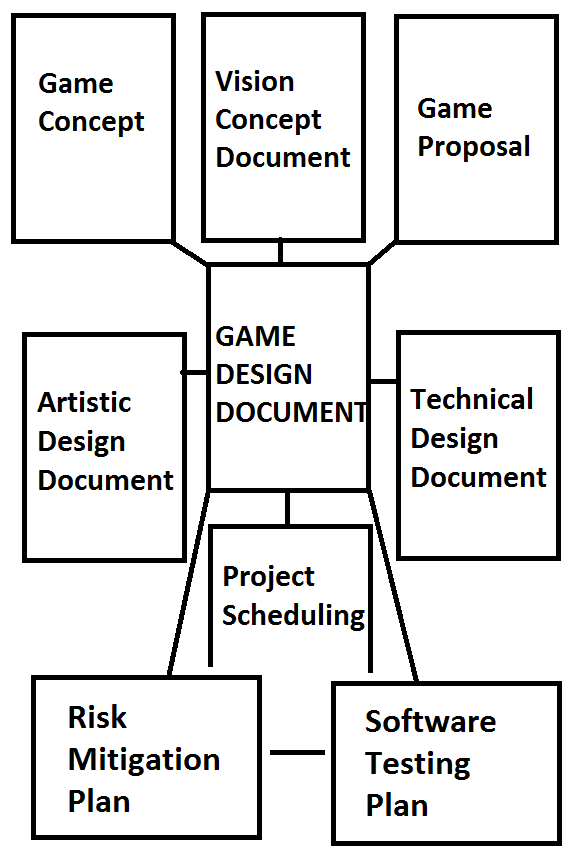 The game design document is part of a set of documents that specify the complete details about the game you are creating. All of these documents, are collectively called the production plan:

The Game Design document can be internally divided into three sub-parts, where each part of the document describes a special phase of the game project. It describes the three development stages which are: from concept to design to production. These are:

The concept paper acts as a letter of proposal, where in the entire objective as well as the tools and human resource requirement is planned. This helps to set out our goals clearly (or the entire team) so that every one is on the same page.

It also acts as a sales tool for partners who will take the product to the market to sell and publicize. During this stage you can also start working with a mini-prototype which will give you an opportunity to experiment and revise your idea.

In this document information like: storyline narrative ,genre, target audience, most compelling feature, cost, time for development etc are specified.

In this game design document, there involves an active on-going discussion amongst the artists, animators, sound engineers, and developers. These documents are very often used for clearing confusions by adding comments, and sharing ideas etc as well. The tools and softwarea that will be required for the designing and development of the game are also written with proper budgeting.

Design document is to make sure the end product is just like you expected it to be.

This is the final stage of the Game design document, where the production management and developer's group work to create the final product. Mostly the game designers are outsourced for some specific game design purpose only. Whereas the game production team and game developers are purely-internal human resources of that company. This phase also keep a detail about the number of developers as well as the work assigned to them.


Here we have a very good GDD example (designed by some students for their college project): GDD Example