So you want to be a game designer. It's a very interesting choice of career; and we must mention that it's a long road, with more than your share of roadblocks and challenges that you'll have to overcome. But it's equally rewarding as well. After all, there's nothing like watching a world which you created in your mind, come to life before you, ready to be played, ready to tell your story.

Not to mention that there's also some hard cash to be earned. The average salary of a game designer in the U.S.A. is about $84,000 per year.

Game Designer, is the person behind everything that's going on. It was a designer who came up with the idea of Mario jumping over pits and pipes, they are the one who decide that one clip in the machine gun will hold 34 bullets, they are the one who decide if the game will be a multiplayer game or not. He/She is the creative head of the group. They are also responsible for collaborating with artists, composers, voice actors, programmers, testers and so on to ensure that the team has all the expertise required.

Excited? You should be. However, as a beginner, starting game making (note the difference between game making and game designing), you'll more than likely be doing the work of a lot of team members yourself, or in a small group. That's why this tutorial series is aimed at getting you up and running to make games on your own or with your own team that you can assemble, as you progress in your career/profession. What will we be using for making all these games? How are we going to do this?

All your questions will be answered soon.

Why you should not ignore 2D games?

In a time where games like these are in the market: Why make 2D games? Do people still play those games? Especially since it's been so long since the times when you would hook up your old NES (Nintendo Entertainment System) to the TV and play Contra all day?

That's because 2D games haven't yet lost their charm, and most likely never will. If they did, most Android games you know today wouldn't exist, and neither would a lot of 3D games that started out as 2D concepts. 2D game development is also less taxing on your resources, since you literally have one less dimension to deal with in your project. That means it's great for beginners and small teams who have less resources to work with.

If you're still not convinced, have a look at these beautiful 2D games: These are all 2D games. Yes, even the ninja game in the last picture.

Initially released in 2005, Unity is a game development environment and engine for over 20 various platforms. It works on MAC OS X, Linux, and Windows.

Unity quickly became the go-to for people warming up to game making with its simple and easy-to-understand interface. Frequent updates, good documentation and an even better community made it one of the best engines to work on. In 2013, with its 4.3 update, Unity released a variety of tools for teams and developers to make 2D games on, making the task much simpler than it was before. Unity also serves as a personal favorite of mine, since it's one of the first game development programs I learned to use and it really fired my passion for getting into the game making industry.

So, enough with the history and what may appear to be blatant advertising, let's sink our teeth right in. To grab the latest version of Unity, simply head over to the Unity website at unity3d.com

Once you open up the webpage, click on the button saying, Get Unity.

Scroll down, and you should find this: 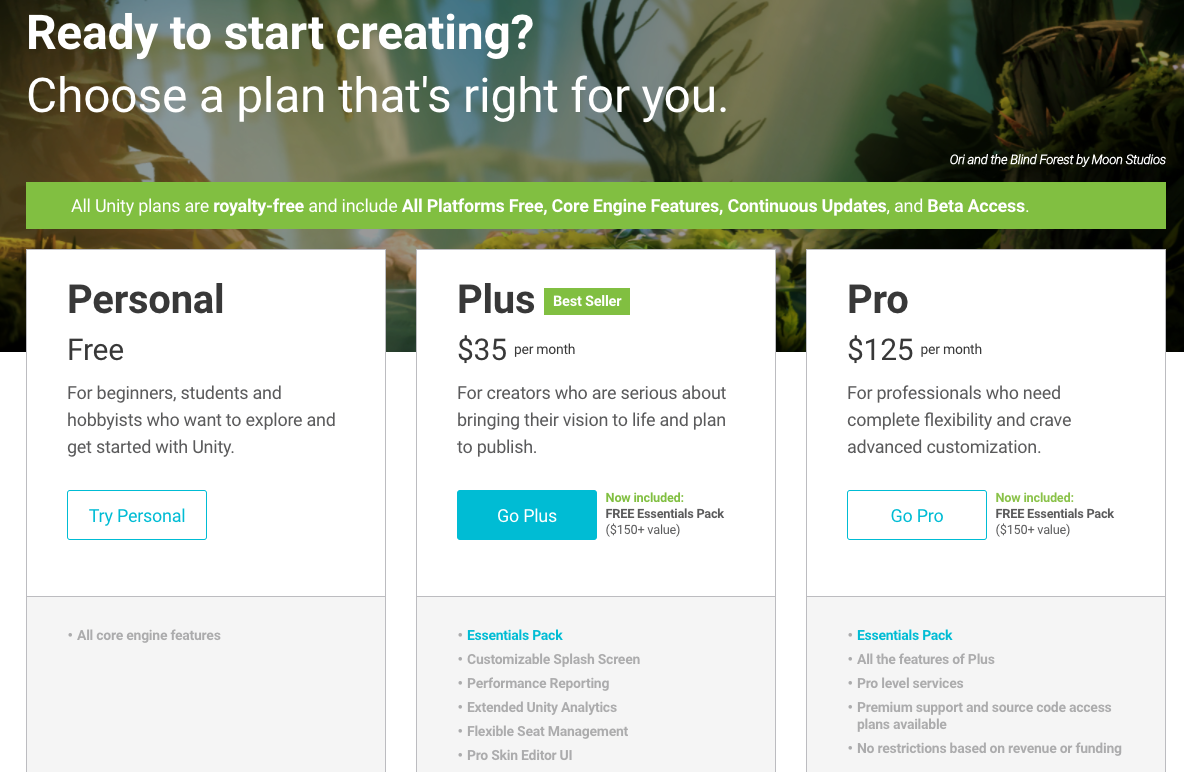 Click on the Try Personal button and get the installer. The installation process that you see is standard for pretty much any program that you install, although I'm going to be making a special note of the following screen: 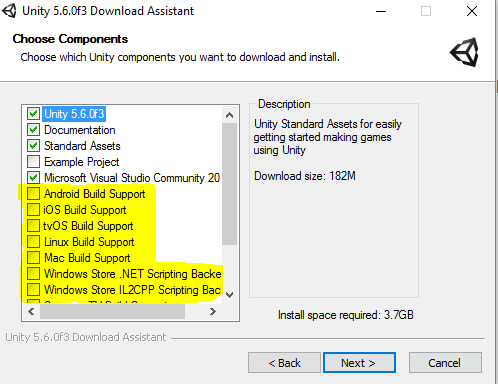 See that highlighted stuff? That's where you should stop and think before you continue. The ambitious (read: crazy) new developer would check every box that's in the list. Don't be that. What you should do, is think about what you are aiming at. If you're interested in making Android games or mobile games in general, feel free to tick the Android and iOS boxes. Basically, grab what you need, don't, what you won't.

Your hard drive will thank you for it :)