Animation and Animator in Unity 3D

Animation is one among the two components of a game, which brings it to life (the other being audio). Unity’s animation system is called Mechanim, and its power lies in bring humanoid models to life. In previous versions, another component called “Animation” was used, but it has now been depreciated in the recent versions of Unity. 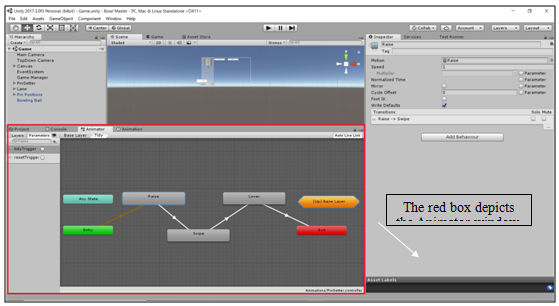 Here in this tutorial we will see the basics of how the Animator is used for creating animations. We will make a mini game module of a door that opens on us pressing space and then closes if we press space again. So lets start our journey and hope in the end, we all get through that door.

In this module we will set up our environment. This means that we will be creating:

2. Setting Up Our View

This module is for those who do not have an Animator panel open. If you do, skip to the next section.

To open the Animator panel, click on the Window option on the menu bar and from the drop down list select Animator.

We will use both of these to create our sliding door animation.

3. Creating Animations for the Door

For creating animations, we first create the animation movements, then we order those movements in the form of a state machine (look it up!) so that we are able to transition from one state to another. Do not be intimidated by the animator figure below. After this tutorial, you would be making these in your sleep. 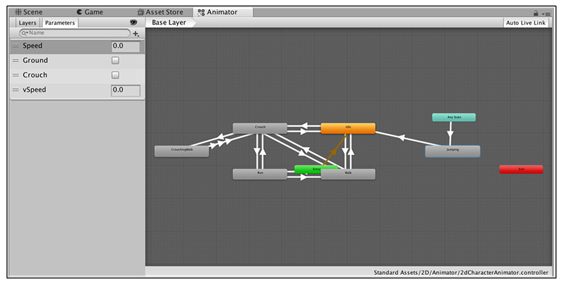 Now for creating the animations

Now that you have your moving doors, we have the problem of making them move according to our will. For this, we have to have an understanding of the Animator and what it actually does.

Like it was mentioned above, the Animator takes care of the transferring of one Animation state to another. For exmple, imagine yourself playing a First Person Shooter game like PUBG or CS: GO. Here if you are only pressing W, the player character walks or jogs, but as soon as soon as shift is pressed in conjunction with the W key, the player seamlessly bursts into a sprint. This change from “Walk State” to “Sprint State” is what the Animator takes care of.

Coming back to our door, if we open the Animator we will see various colored boxes with stuff written on them like “Entry”, “Any State”, “Exit”, etc. These are the various animation states.

Among these you’ll find an orange arrow starting from Entry state to the DoorOpen state. This arrow (or any such arrow) depicts a transition from one animation state to another. Lets see what the various states signify.

Also you will see an arrow going from the Entry state to the DoorOpen state. This is not what we want. Here the door opens as soon as the scene starts. What we desire is that the door waits until we command it to move. So we need an “Idle” state, i.e. a state with no Motion attached to it. 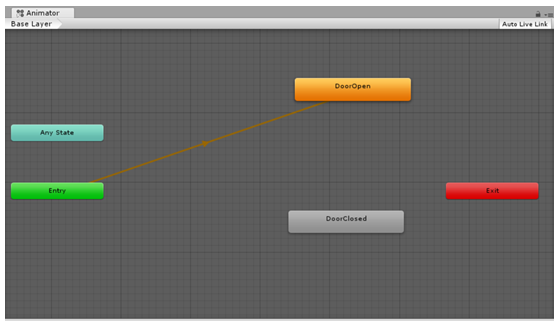 Now for the transitions. Transitions refer to the transference of control from one state to the next. The arrow in orange that you see represents a transition.

To create a transition, right click on the initial state> from the drop down select Make Transition>Click on the next state.

So try to create a working state diagram yourself and check it whether it is correct or not with the image below. 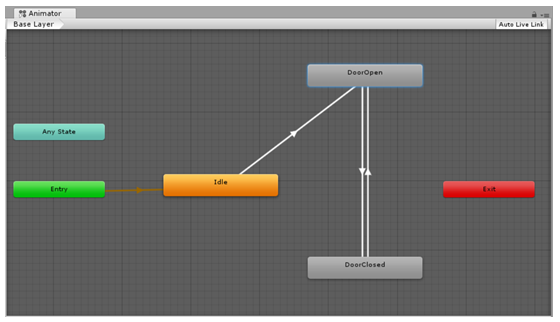 Its not over yet. Here if you press play, the door opens and closes automatically. This is because our transitions are condition-less. Condition-less transitions occur as soon as the initial state has finished playing its animation once. We need control here. So we apply conditions to the transitions.

To apply conditions, we require to set a parameter which toggles the door open or closed. To do this : 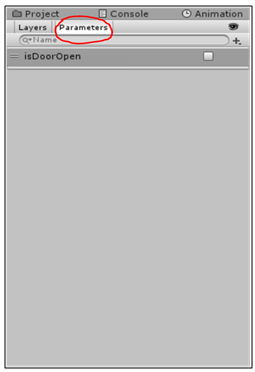 Now to apply the conditions to the transitions:

The value of the transition 1, 2, and 3 for “isDoorOpen” are true, false and true respectively.

Hence we are done with setting up our conditions. We will be triggering these transitions via code.

6. Through the door and to the other side

Well I would like to congratulate you on creating your first moving object in Unity. And what’s more it works as per your command! Great job. This was just a glimpse of the power of the Mechanim system can do if its in your capable hands.

So press play and see the magic happen when you press the space bar.