The .gitignore file is a text document that tells Git what files it should ignore. We don't always want Git to keep a track of every file on our repository and we can ask Git to ignore the changes that we make to our files with the help of a special .gitignore file. 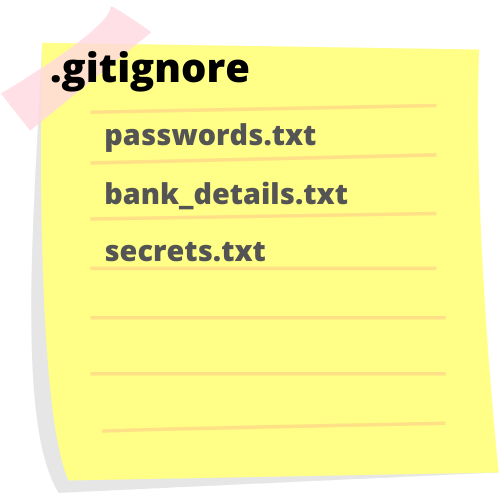 What is the .gitignore file?

We can add names of files or can specify patterns to identify certain files in the .gitignore file. Let's understand how to construct these patterns.

Let's look at some examples to better understand the usage of the above patterns.

As discussed in the above sections, we can tell Git to ignore files by either directly writing their names in the .gitignore file or by specifying patterns to identify a certain group of files.

Similarly, we may also want to commit a file that was previously ignored. We can do this by forcefully add the file to the staging area by using -f along with the Git Add command.

We can also mention our personal ignore rules which are not committed by Git so they cannot be cloned by others. These rules can be for the files that may only be created by your system or by some software that you are using for the project. We can set these rules in the .git/info/exclude file present in the repository.

The .gitignore file is a very important part of version control as we don't always want Git to track all the files. These files can be the ones that are auto-generated by our project or some other files that are only created by our development tools that may lead to an error if cloned by someone else. We can construct different patterns in the .gitignore file to identify the files or directories that we want to ignore. We can also create a global .gitignore file for all our Git repositories. We also learned that we can commit an ignored file or can ignore a committed file. I hope this tutorial was helpful and you learned something new.